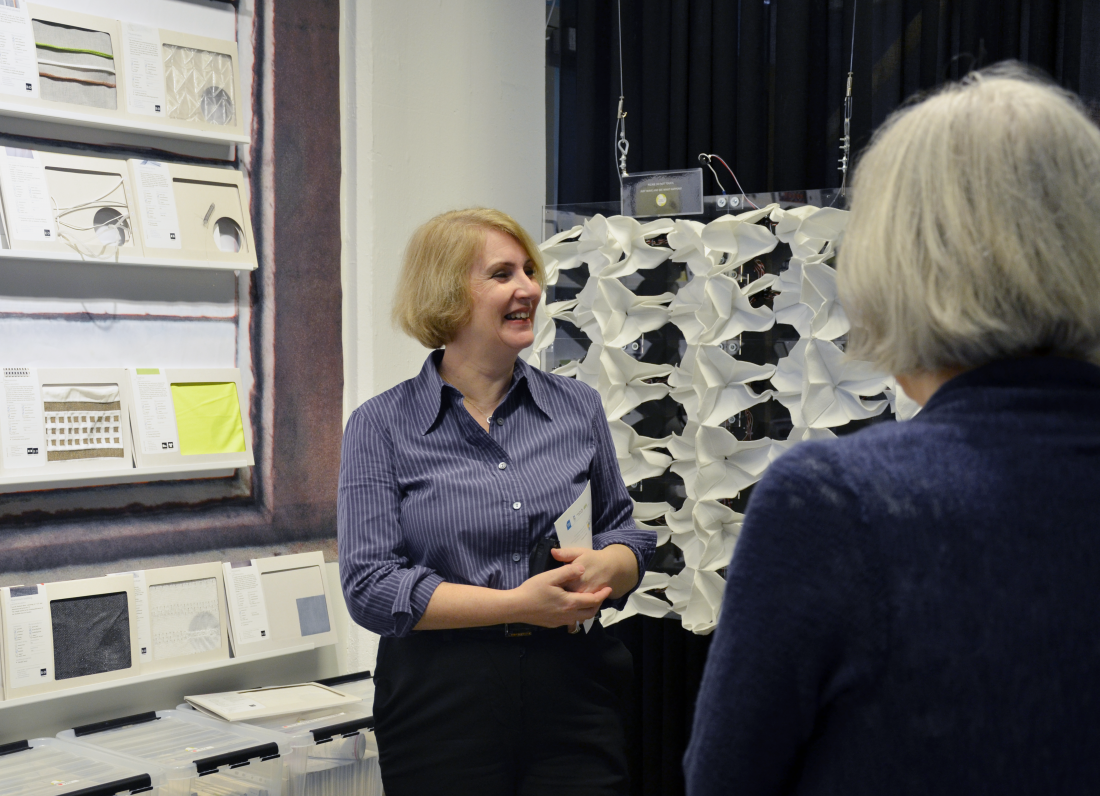 “Once technology is here, it’s here—just like Pandora’s Box. We are not going to put the lid back on”, says Professor Marie O’Mahony. Almost 30 years ago, people started to realize that technology was having an increasing impact on textiles. Since then, smart textiles and wearable technology have rapidly evolved.  Increased customer expectations, safety issues, policy regulations and sustainability are some industry challenges, Marie believes.

Marie O’Mahony is an academic, consultant, author and practitioner. Her teaching, research and practice spans advanced textiles and fashion, wearable technology, sustainability and future trends. During her visit at Science Park Borås earlier this year, we got the opportunity to ask Marie about her own history in wearable technologies and smart textiles, as well as current and future trends.

Going back to the start, where did your career path first begin?

– My background in textiles starts at Edinburgh College of Art and Design where I studied fine art tapestry weaving. It’s a beautiful, traditional form of weaving, also very labour-intensive. I became more and more interested in the impact of technology and particularly computer technology on tapestries and textiles in general. I spent my final post graduate year working with the first campus computers as a means of generating imagery for the tapestries.

After graduation, Marie grow her knowledge and she started to research, set up exhibitions and write books on the subject. This was in the early nineties.

– It was still early, but people were starting to realize that technology were having a significant impact on how textiles looked, how they were used, and for the future development. When I found that manufacturers and brands were coming to me for advice I decided to focus my career on the combination of textiles and technology as a consultant, academic and author. A big portion of that has been smart textiles and moving into wearable technology.

Although Marie found the area very fascinating and exciting, the lack of power sources parted her interest for some years (this was before the lithium battery came into place). In the later 90s, she returned to the field.

– When I felt that the time was right to become a part of this field once again, I visited the Swedish School of Textiles in Borås. To me, Borås has always been ahead of the curve in terms of smart textiles right back when I first started going there in the late 90s. I have always looked at Borås for inspiration in the ways the technology and conceptual development is brought together with the aesthetics. Ultimately, if something doesn’t look or feel good, nobody is going to buy it or wear it.

What progress in smart textiles and wearable technologies did you find most interesting during this time?

– I see two separate areas. One is the computer technology and the other is being the conceptual side. People were coming up with ideas but they had no clue how to realize them. Those who were initially making it happen were quite focused on the computer side.  For example, the first conference that I attended on the subject was at MIT in 1997, it was titled ‘The First International Symposium on Wearable Computers’.

Marie mentions power supply and the move towards the lithium battery as one of the biggest change factors. This brought a lot of people into play of the development in wearables and technologies.

– There has also being a move towards flexible electronics and one of the exciting areas in North America is the synergy between flexible electronics and parallel textile industries. I am honoured to b a Leadership Council Member of intelliFLEX, a Canadian not for profit industry alliance aimed at facilitating partnerships and accelerating growth of flexible and hybrid electronics. There is a huge interest in e–textiles within our members. I am delighted that we have Susanne Nejderas as on of our Keynote Speakers at our annual conference this year CPES2018 and hope that this will lead to further cooperation between Sweden and North America in this field. In an earlier article you talk about privacy and protecting the user, is wearable technology truly a win-win situation for everyone?

– Well, once technology is here, it’s here – just like Pandora’s Box. We are not going to put the lid back on. I think the positives outweigh the negatives and that we will see great benefits to the society. But we also need to be mindful and not overlook or push aside potential dangers. We have a responsability to develop protocols around different areas such as privacy, standards and test all of these initiatives. The protection needs to be internationally recognized and whether it’s within the industry or more formal standards we put in place, that remains to be seen.

Marie speaks about the development in North America, where some progress are being made. She is involved in discussions with the standard agency in the US with the purpose to develop national standards and protocols for smart textiles.

– We should hear more about that later on this year. It’s important to reassure the customer. To let them know that they are protected in some way. It protects the industry as well. We don’t want to end up with a field that is painted by bad policy and bad practice. We want smart materials and wearable technology to have a strong positive reputation and to maintain that globally.

Is today’s customer difficult to please?

– There is still a lot of excitement in the field which is great, but it means that expectations among consumers are high and once the product is launched it has to meet that, otherwise it’s in trouble. If something is not working as the consumer is expecting, the first manufacturer or brand will find out about this is most likely on social media. Once it’s on social media, it’s very difficult to call back and to put right. Brands and manufacturers are very mindful of this. They want to ensure that it is working as to customer is expecting it to and that it’s very clear what the deliverables are.

What other evolvements will take place in 2018?

– I see two areas that are moving towards a very strong direction and in some ways they are linked. One overarching is sustainability and the circular economy. This is something that I first gave a talk on at a conference 3 years ago to a technology-focused industry audience. I’ve honestly never had such a strong response to a talk. People were coming up and talking afterwards, saying that they had been too caught up with just making things work and figuring out power supplies. Many felt that it was time to look at smart materials and wearable technology from a sustainability perspective and to address those issues.

– There is a renewed interest on how can we supply energy. We are carrying more and more devices for a range of uses from personal to health and workwear. Having the ability to provide our own power reduces the anxiety about running out of power and has benefits around ergonomics, weight and sustainability.

As you know, we are developing a Do Tank where small and middle sized companies will receive help to develop circular business models. Is that support necessary, really?

– That’s a good point. We absolutely need those areas and support mechanisms. So often I see start-ups with a great idea that they get to prototype or proof of concept, but need help to get to the next level. It can be prototyping or a small level of production and then into larger production and markets. These platforms are vital in terms of supporting the emergence of that field and gaining strength in in a region or in a country. I see Science Park Borås doing this in a very smart way bringing different areas together such as smart textiles and sustainability, expertise and strong knowledge. Providing a literal meting place for academia and industry to come together is key in my opinion.

What would happen without these initiatives?

– In North America, business often make a good start but then they get to this certain point when they just can’t can scale up for production. That’s one of the biggest issues that we have. It’s also very time sensitive. There has been a growth of ‘Patent Trolls’, from non-participating entities (NPEs) as well as larger players in the industry itself.

Looking into the crystal ball, where are we at five years from now?

– I think one of the biggest trends that we are seeing is a great desire to bring manufacturing back for higher-value goods and I see smart materials and wearable technology is an important area in that. The big stumbling block is skills and training. It’s one thing to develop a fantastic concept and prototype, but you really need to get it into production.

One of the main challenges is not only to attract a high level of skill and the right people, but also to retain them. Marie stresses that people have to see potential for additional training and that it is a good career option to go into.

– It will also become more important with sustainability and ethical issues within the industry and providing a transparent supply chain. This demands innovation not only in terms of material and product development, but we also need creativity in the way that we structure our business models and do business – in how we go from concept to consumer and back again.

Finally, what did you take away from your visit?

– Most impressive for me is Science Park Borås and how quickly it has developed from the “this is what we want to do” stage to creating a platform that facilitates  dialogue between industries, regional strategic development and academia. There is also an acknowledgment that change will continue and I see an openness to further volutionary stages.  It’s smart!

This May, Science Park Borås and Smart Textiles will be attending at Canada’s premier conference and trade show exhibition for printable, flexible and wearable electronics, called CPES2018.